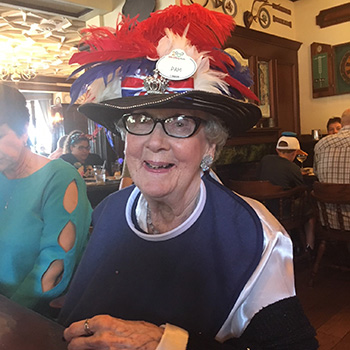 When Pam Brody started in show business more than 51 years ago in London, her agent said she had to have a name, something to describe her act, something that would stick.

”He told me people were sick of ‘glamorous,’ so I became ‘vivacious’,” Brody explained over her fourth cup of coffee at the London Tavern in downtown Orlando. On a sweltering Central Florida day, the piano-bar singer nibbled at her tuna salad sandwich, asking everyone around his/her birth month, this became her signature trademark…The Hat Lady knows my birthday.

”I’m not into astrology, but I like to know,” Brody quips, the trill of her voice giving away her Irish roots.

”Vivacious” is an accurate enough adjective for this incredible, eloquent lady, who has always declined to give her age, but other adjectives come to mind, too – like funny and eccentric. Of course, anyone who wears broad-brimmed straw hats with poofy flowered bows and a sparkly knitted scarf might be dubbed eccentric.

Her life of entertainment has always been energic…Pam loved to rattle off her upcoming appearances, then downshifting into a commentary on her fitness philosophy. ”Drink lots of water. Exercise. Everything in moderation – even sex.” In a 1992 interview, she laughed as she pulled coral pink lipstick from its case for the third time since lunch began. At one point in her career, Brody modeled pantyhose and keeps her youthful frame in shape with swimming and playing tennis. She loves golf, too, but it was ”hard to fit in” her performance schedule.

For more than 25 years, Ms. Brody performed almost every night of the week at a different performing location. Fridays and Saturdays, she did dinner music at Sergio’s on University Boulevard in Orlando. Thursdays, she played and conducted sing-alongs at a bar in Orlando’s Parliament House. Most Wednesdays, she was at the Bull & Bush English pub in Orlando. Other weekdays, she was off to the malls or to private parties playing her favorites at the piano. In late September, Ms. Brody says she provided the music for the Radisson Plaza Hotel Orlando’s Sunday brunch.

But how does this Irish native, the daughter of a schoolteacher and a businessman, find herself singing in Central Florida?

It all started in Dublin.

As a girl, Brody attended boarding school. ”I made the kids laugh, and I realized I could play. I was very quick to learn,” she said. When a friend at the British Broadcasting Corporation suggested Ms. Brody consider studying acting, she attended the Royal Academy of Dramatic Art in London. ”Drama is my love. It’s still my love,” she says.

A gig on the Queen Mary took Brody to Bermuda where she docked for a dozen years at the Castle Harbour Hotel. ”I never owned the place, but they put my name right above the name of the pub:

Her husband, Danny, a singer-actor, worked as an impressionist business at Disney-MGM Studios Theme Park. While Dillon does dozens of characterizations, from Bing Crosby to Alfred Hitchcock, Brody dabbles in impressions. She can break into Edith Bunker at a moment’s notice and uses her modeling experience to give a glamorous air to her Marlene Dietrich impression. Later on, Mr. Dillon, her beloved husband retired after a brief illness passing away in 2005.

Ms. Brody attributes her career move to Florida to ”being in the right place at the right time.” When a wedding brought Brody and Danny Dillon, her husband and entertainer partner, to Central Florida, the Royal Plaza Hotel needed an act, and a friend told the management Brody could do it. She auditioned, saying the whole time that she did not live in Florida, she lived in Bermuda – one heck of a commute.

It didn’t matter. She had a contract offer. Friends told her to take it, and she did. ”I signed on at the Royal Plaza for six months and ended up staying seven years,” Ms. Brody recalls.

With movie bits and television commercials to her credit, Pam hoped to get back onto the big screen someday. All her career, she just enjoyed her life at the piano, singing and laughing and coaxing her audience to do the same.

Ms. Brody appeared at Sergio’s in the Suncrest Shopping Center in Orlando until 1995, whereas the restaurateur and his singer have been friends for 10 years.

In 1992, Ms. Brody became the star act at the ‘Rose and Crown’ Restaurant, Epcot, Disney World, performing for over 20 years. ”She’s a happy woman,” a manager says. ”She’s had a full life, and she pleases all kinds of customers. She has a very large repertoire.” The ‘Hat Lady’ hung her hat in 2014.

For over 2 years, Ms. Pam Brody Dillon has been part of the Grand Palm Hotel. She has numerous friends, daily laughter, and finds peace in a legacy of bringing joy to generations for 51 years….and counting.

Oh, when is your birthday, love…