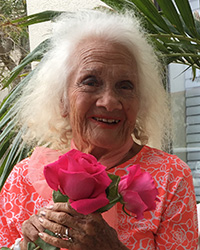 It has been an absolute privilege and honor to have the Baroness as our guest at Palm Garden of West Palm Beach. The Baroness has lived in Palm Beach since 1964, living quite an elaborate life as an accomplished artist, model, and actress. She was born in Vienna, Austria traveling the world, and speaks fluently five languages. The Baroness has many fond memories, to name a few; the Imperial Theater on Broadway and starring in the movies Manage and Pulse. She is also a former Miss Austria, the Beauty Queen of the Carnival of Nice, and has danced with the Ballet of Monte Carlo.